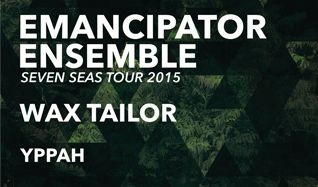 Beatcue & Playstation Theater are hosting a contest for a pair of tickets to see Emancipator Ensemble as a part of their Seven Seas Tour along with Wax Tailor & Yppah. One lucky winner will receive complimentary admission for two to attend the show on Saturday October 17th, 2015

To enter please follow us on twitter: https://twitter.com/Beatcue RT the contest and then email the following information to euphoriaxnyc@gmail.com and reference “PLAYSTATION THEATER” in the subject field. Incomplete or multiple entries will be disqualified.

No purchase necessary to enter the any Beatcue contest. The contest will end on the date stated in the posting and winners will be announced shortly after and contacted through email. This contest is open to participants 18+. Transportation is not included. You must present valid ID to enter and claim your ticket. The prizes that may be awarded to the eligible winners are not transferable, redeemable for cash or exchangeable for any other prize. Void where prohibited. Odds of winning depend upon the number of participants.

“Emancipator stands at the front lines of some of the best in cinematic, hip-hop-influenced soundscaping since Massive Attack released Blue Lines in 1991.”  – Noisey

“While many attempts to merge classical melodicism with dance music sound awkward and gimmicky — slumming with last year’s beat or just trying to make something the kids will buy — Emancipator has found a balance. No part of his fusion is forced.” – The New York Times